In Search of an EU-India-Japan Trilateral 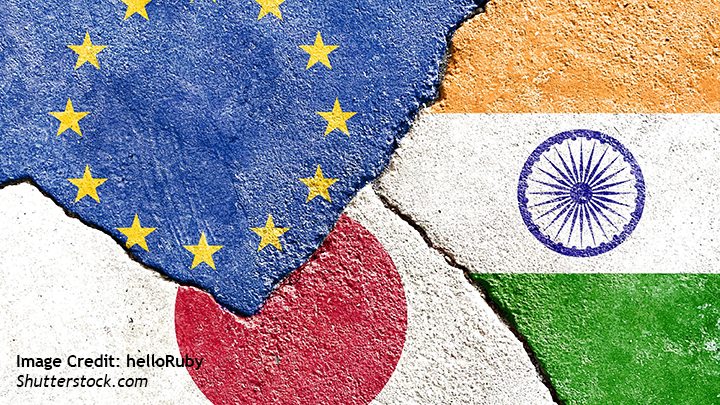 Even before the war in Ukraine, the European Union had been gearing toward an “increasingly competitive strategic environment” by developing its geo-political autonomy to meet Europe’s security responsibility and reduce strategic shrinkage. Post the Ukraine invasion, however, security and defense have assumed greater relevance.

Russia continues to be a permanent adversary in the broader European estimation. However, it is China’s growing global influence that has instilled a new momentum into the EU’s pivot to the Indo-Pacific, the world’s current and future economic and political center of gravity.

In 2021, the European Union (EU) solidified its strategic outreach to Asia with the release of the EU Strategy for Cooperation in the Indo-Pacific and the €300 billion Euros ($327.3 USD) trade and investment-centric Global Gateway strategy. This new integrated European approach to the region began in earnest in 2018 with the release of the Indo-Pacific strategies of three of its member-countries ー France, Germany, and the Netherlands in that order ー in quick succession, and the EU strategy on Connecting Europe and Asia.

Notably, these strategies are non-confrontational and focus on cooperation with like-minded regional partners such as India and Japan. They keep intact the centrality of the Association of Southeast Asian Nations (ASEAN). Viewing these partnerships through the lens of strategic autonomy, creating minilateral regional groupings seems an obvious choice.

You can read the full article on JAPAN Forward’s website.