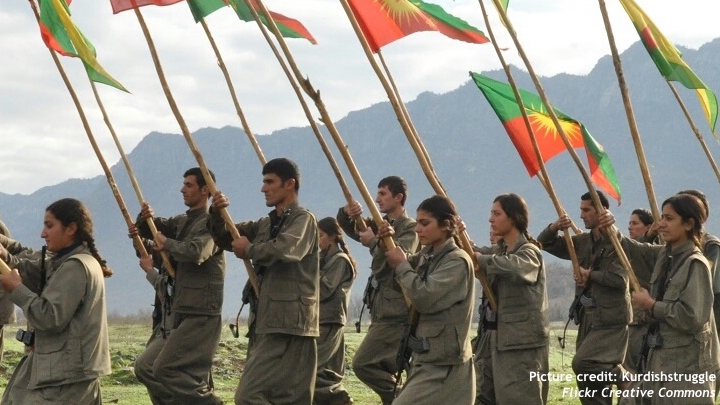 The Kurdish question may serve President Recep Tayyip Erdoğan, helping to secure his re-election. The election campaign has demonstrated that Erdoğan no longer energizes the masses; after fifteen years in power, the Turkish president shows every sign of being worn out. He is no longer an inspirational leader; he has nothing new to say or to promise. But Erdoğan nonetheless retains the loyalty of the AKP base. And as the spokesperson of the nationalism of the Turkish state he is assured of enough non-partisan support as well.

The Kurdish question has had a decisive impact on Turkey’s elections since 2015, and it is likely going to be decisive for the outcome of the combined presidential and general election on June 24 as well. Indeed, the election is held to enshrine a presidential system that is designed precisely to cope with the Kurdish question; it represents an attempt to neutralize the potential power of the Kurdish political movement, by transferring power from the parliament to the presidency. The introduction of the presidential system is in large measure a response to the result of the general election in June 2015, when the pro-Kurdish and left-wing Peoples’ Democratic Party (HDP) sensationally broke through the ten percent threshold to parliament which was supposed to keep Kurdish parties out of the legislative body of Turkey; the HDP obtained thirteen percent of the votes, and became the third largest party in the Turkish parliament. This was not a development that the Turkish state establishment was prepared to accept.

While the Kurdish political movement surged into parliament, the violent arm of the Kurdish movement, the Kurdistan Workers’ Party (PKK), had taken advantage of the peace process that the Turkish government had initiated in 2013 to entrench itself in the cities in the southeastern, Kurdish region of the country. The response of the Turkish state to the dual, armed and political, Kurdish challenge – with the HDP becoming a potential power broker in the parliament and the PKK wresting control over the urban areas in the southeast of the country – was to restart the war against the PKK and to move against the democratically elected national and local HDP representatives.

The Kurdish question decided the outcome of the snap general election that was held in November 2015 to “correct” the result of the June election; the restart of the war against the PKK helped the Justice and Development Party (AKP) recover while the HDP lost one million votes. However, the HDP still managed to gain representation in parliament. In May 2016, the AKP and its partner, the Nationalist Action Party (MHP) introduced a bill in parliament to lift the immunity of members of parliament, which was supported by the center-left Republican People’s Party (CHP); the move opened for the subsequent amputation of the leadership of the Kurdish political movement, with the imprisonments of HDP lawmakers, including the co-leader of the party, Selahattin Demirtaş.

The opinion surveys suggest that the HDP will succeed in crossing the ten percent threshold on June 24 as well, which would deny the ruling AKP-MHP alliance its majority in parliament. But in contrast, the Kurdish question may serve President Recep Tayyip Erdoğan, helping to secure his re-election.

According to the surveys, the presidential election is likely to be decided in a second round on July 8 in what will be a contest between the incumbent and Muharrem İnce, the candidate of the CHP. To be elected in the first round, a candidate must obtain more than fifty percent of the votes. Support for President Erdoğan ranges around 47 percent, and in the vicinity of 30 percent for İnce, who has been the star of the campaign; he has succeeded in reaching out to voters who are not CHP supporters. Selahattin Demirtaş, the HDP’s imprisoned presidential candidate, is predicted to receive around 10 percent, which would amount to a repeat of his success in the presidential election in 2014. There will be a contest for the third place between Demirtaş and Meral Akşener, the leader of the right-wing Good Party, whose numbers vacillate between 10 and 14 percent. Temel Karamollaoğlu, the candidate of the Islamist Felicity Party has a support around 2 percent.

The CHP is beholden to its founder and first leader Mustafa Kemal Atatürk’s vision of a unitary, Turkish nation state, and even though the party’s Turkish nationalism has on occasion been tempered by a moderate approach to the Kurdish issue, the party has nonetheless for many years been virtually non-existent in the Kurdish provinces. The Kurdish vote has been split between the AKP and the HDP; historically, the Kurds, most of whom are religiously conservative, have sided with conservative parties – the AKP’s predecessors. But this year’s presidential campaign has inaugurated a change: the CHP’s presidential candidate Muharrem İnce has succeeded in swaying Kurdish voters; nearly eighty percent of the HDP voters express that they would vote for İnce in a second round. Some Kurdish voters may in fact prefer İnce already in the first round on June 24 – over what would be their natural choice, Selahattin Demirtaş – in order to prevent Meral Akşener from being qualified to a possible, second round. Akşener, during whose tenure as interior minister in the 1990s a “dirty war” was waged by the Turkish state in the Kurdish southeast, remains a militant Turkish nationalist, and is an offensive name for the Kurds.

On June 11, İnce held a well-attended campaign rally in Diyarbakır, the main Kurdish province of the country where CHP representatives have not gathered any crowds for years. He promised to “honor” the Kurds, stating that he was in favor of education in Kurdish. Although İnce did not dwell on what “honoring” the Kurds would mean more specifically – other than granting the right to education in Kurdish, which will not be sufficient – his statement does suggest that he recognizes that dignity and respect are at the heart of the matter, and that essentially, the Kurds ask to be treated on an equal footing with the Turks.

The audience in Diyarbakır was already well-disposed toward İnce, who had made his first journey as a presidential candidate to a prison in the western Turkish province of Edirne, where he visited Demirtaş. Indeed, as İnce recalled during his campaign speech in Diyarbakır, he had parted ways with his own party on the question of the lifting of the immunity of members of parliament, the move that made it possible to incarcerate Demirtaş.

İnce was furious when the CHP’s leader, Kemal Kılıçdaroğlu, instructed the party’s parliamentarians to support the bill that AKP and MHP had presented. He warned that the move was going to seriously impair Turkey’s democracy. On the day of the voting in parliament in May 2016, İnce in yet another display of opposition joined Demirtaş and his party colleagues at their table in the garden of the parliament. Yet İnce is known to have strong Turkish nationalist views, and while he is well received by the Kurds, he also enjoys significant support among right-wing Turkish nationalists; 85 percent of the supporters of Akşener say that they would vote for him in a second round. Apparently, İnce sees no contradiction between holding Turkish nationalist views on some issues and taking a principled, democratic stance and recognizing the need to “honor” the Kurds. That makes him unique among Turkish politicians, and his rise during the presidential campaign – the fact that he seems to be succeeding in reaching out to different, ethnic and cultural constituencies – suggest that it might not be impossible to bring about societal reconciliation in Turkey.

However, İnce is a lone rider. It is notable that no one else in his own party joined him in his public protest against the anti-democratic decision that paved the way for the incarceration of HDP parliamentarians. Moreover, his unconventional bid to “honor” the Kurds while at the same time securing the support of Turkish nationalists is ultimately unlikely to succeed as the country is on a war footing. A Turkish invasion of Kandil, the mountainous area in northern Iraq where the PKK has its headquarters, is imminent.

Turkey’s intervention earlier this year in the Kurdish-held Afrin province of Syria enjoyed broad support in society, and led to an upsurge of Turkish nationalism. Speaking on June 15, President Erdoğan announced that Turkey is now bombing Kandil, and he stated that more “good news” can be expected in the coming days.

The Turkish armed forces have been making preparations for a major, final assault on the stronghold of the PKK since March this year, with the avowed aim of raising the Turkish flag over Kandil. It is highly improbable that this can be achieved before the possible second round of the presidential election on July 8, not to speak of before June 24, but the mere start of the Turkish army’s march toward Kandil may be enough to feed the nationalism of the Turkish public, and boost President Erdoğan’s standing. In that case, İnce will be forced to make a choice between continuing to please the Kurds and retaining the support of the Turks. In any case, many of the right-wing Turkish nationalist and Islamic conservative voters who have been inclined to vote for İnce against Erdoğan can under such circumstances be expected to revert to the latter regardless of what İnce says.

The election campaign has demonstrated that Erdoğan no longer energizes the masses; after fifteen years in power, Turkey’s president shows every sign of being worn out. He is no longer an inspirational leader; he has nothing new to say or promise; his supporters have – like everyone else in Turkey – become increasingly concerned about the future, dire economic prospects of the country. But Erdoğan nonetheless retains the loyalty of the AKP base. And as the spokesperson of the nationalism of the Turkish state he is assured of enough non-partisan support as well.

This article was originally published at the Turkey Analyst. Find it here.