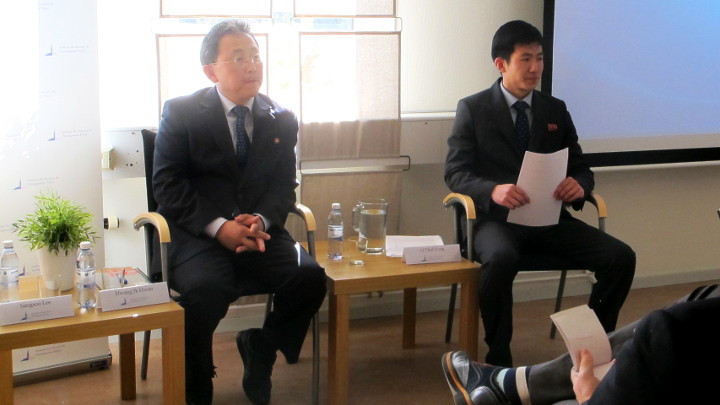 On May 5, 2017, the Institute for Security and Development Policy welcomed Hwang Ik Hwan, Director of the Institute for Disarmament and Peace (IDP), DPRK, and O Chol Yong, Research Fellow at the same institute. Both speakers have spent one month as Visiting Fellows at ISDP. The event was moderated by Dr. Sangsoo Lee, Senior Research Fellow at ISDP.

Mr. O started his presentation by illustrating the two main ways to achieve peace: reconciliation and balance of power. Reconciliation is only possible when both parties come to a mutual agreement, otherwise, when one of the parties refuses to sign an agreement, the only viable way is to obtain a balance of power in the region. Although the DPRK, Mr. O argued, has made consistent efforts to reconcile and to sign a Peace Treaty, the U.S. has always declined. First, the U.S.’ insistence that South Korea – which did not sign the armistice agreement – should join the talks. Second, when the DPRK proposed tripartite talks including South Korea, the U.S. insisted that the peace treaty should be concluded between North and South with the U.S. only supporting it. Although there are numerous examples, this revealed that the real intention from the U.S was to maintain the armistice.

Despite normalizing its relations with many countries, including Vietnam, the U.S. has continued a hostile attitude towards North Korea. Mr. O argued that the reason is that, in the U.S.’ view, only the “obedient” countries can survive and the U.S. needs an excuse for its military presence in North-East Asia to contain big powers like China and Russia. Mr. O also argued that the U.S. wants to form an Asian version of NATO, but since South Korea-Japan relations are difficult due to historical reasons, it is using the tension with the DPRK as an excuse to bring Japan and South Korea closer and in turn increase its influence in the region. Considered the opposition of the U.S., Mr. O suggested that reconciliation is not a viable way for the Korean Peninsula.

Therefore, the only way for the DPRK to maintain peace is to guarantee a balance of power in the region. The DPRK initially proposed a nuclear-free zone and even tried to join the Non-Proliferation Treaty, but Mr. O argued that it was forced to give up due to the U.S.’ hostility. As the DPRK is under the threat of the biggest nuclear state, the U.S., and borders with South Korea and is close to Japan, both covered by the U.S.’ nuclear umbrella, it had no choice but to develop its own nuclear arsenal. In fact, Mr. O argued, history shows that relying on others’ power is not wise. The DPRK’s choice, he concluded, has prevented war for many years, as the U.S. now does not dare to attack the DPRK.

Mr. Hwang opened his presentation by illustrating the U.S.’ responsibilities: first, the U.S. drew the line between North and South Korea; second, it continued to hinder North-South reconciliation and reunification. The U.S. should now recognize its responsibility in the conflict and stop its anachronistic hostile policy towards the DPRK. After all, Mr. Hwang argued, there is no reason for hostility only because of differences in ideology and system between North and South. The DPRK and South Korea already maintain relations with many countries with different ideology and system. Moreover, the U.S. should support the reunification of the Korean Peninsula, by following the federation/confederation already agreed upon with the 2000 Joint Declaration and ceasing the joint military exercises. When the U.S. supports the agreed format of reunification, they will enjoy support from both North and South Korea and can find a way out from the nuclear dilemma, through the neutralization of the peninsula. Sweden could play an important role in this neutralization process, being it a nonaligned actor.

The forum was followed by a Q&A session, during which Hwang Ik Hwan and O Chol Yong answered questions on the development of DPRK-China relations, how to build trust between the parties involved, and how to de-escalate tensions in the region.

ISDP thanks Hwang Ik Hwan, O Chol Yong and all participants and members of the audience for joining in the discussion.