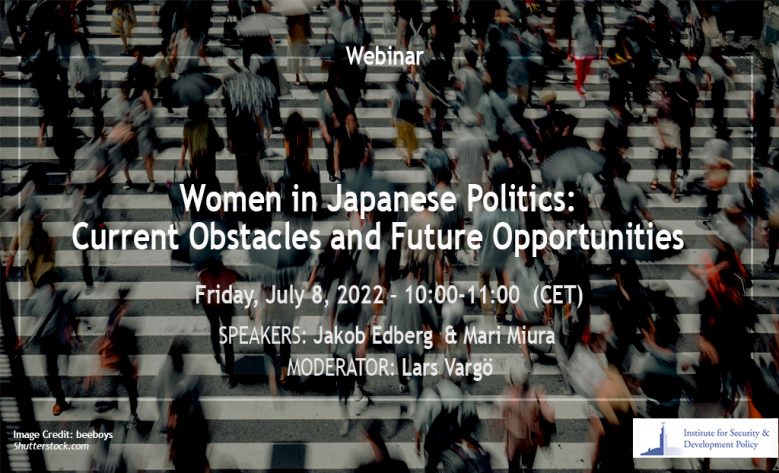 Did you miss this webinar? The full recording is available on ISDP’s YouTube channel.

Japan stands out among democracies in Northeast Asia as both the region’s oldest democracy as well as one with a surprisingly low level of female political representation. Taking stock of the obstacles that have impeded female political participation, and looking ahead of what to expect from the upcoming Upper House elections, the Stockholm Japan Center is delighted to host a seminar with distinguished experts to discuss the state of women in politics in Japan.

As part of an ongoing project focusing on female political participation in Northeast Asia, ISDP is honored to welcome Professor Mari Miura at Sophia University and Jakob Edberg, President of the consulting firm GR Japan.

Professor Mari Miura is a professor of Political Science, Faculty of Law, Sophia University. She has a Ph.D. from the University of California, Berkeley and is the author of Welfare Through Work: Conservative Ideas, Partisan Dynamics, and Social Protection in Japan (Cornell University Press, 2012) and Making Our Voices Heard—Revival of Representative Democracy (in Japanese, Iwanami Shoten, 2015). She is also the editor of Japan’s Women Representatives (in Japanese, Asahi Shimbun Shuppansha, 2016), co-editor of Gender Quotas in Comparative Perspectives: Understanding the Increase in Women Representatives (in Japanese, Akashi Shoten, 2014). Professor Mari Miura is also a Co-founder of the “Academy for Gender Parity,” which provides training programs for young women to run for office. She received the Wilma Rule Award (IPSA Award for the Best Research on Gender and Politics) in 2018 and was decorated the Knight of the Order of Merit from the French government in 2021.

Mr. Jakob Edberg has been deeply immersed in Japan’s politics and policy-making for two decades.  As President & CEO of GR Japan, he works and helps clients solve complex political and regulatory challenges in a large variety of sectors and fields – retail, energy, pharmaceuticals, financial services, project financing, foreign policy, and trade just to mention a few.

ISDP also organized a webinar on “Women in Politics: A Comparative Perspective of Sweden and Japan”, you can watch the recording here.