Restraining China in the South China Sea: The Limits of U.S. Leverage 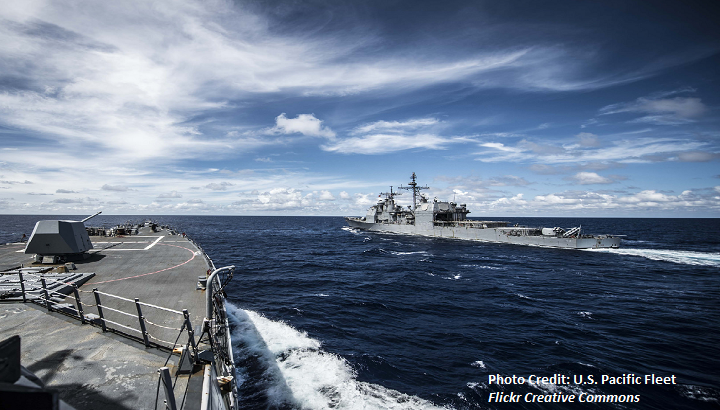 China’s assertive actions in the South China Sea to bolster its territorial claims show no sign of abating. Notably, the United States has been unable to restrain China from pursuing its ambitions in the area. B.A. Hamzah traces the reasons for this “failure” of U.S. leverage while recognizing that China is unlikely to relinquish its claims. This calls for mutual restraint between the two powers as well as promotion of crisis management between the claimant states.

The United States has bolstered its naval and air presence in the South China Sea as well as sought to strengthen the military capabilities of its allies in the region. The objective is to send a message to China to tread more carefully regarding its territorial and maritime ambitions. And yet, seeking to deter China, the result has in fact been the opposite. Since 2010, China has occupied more new features, reclaimed more land, and built more airstrips; it has also deployed more civilian, naval, and air assets in the South China Sea. Neither U.S. military policy nor ASEAN-coordinated confidence-building measures have served to substantively rein in China’s assertive behaviour. This calls into question U.S. policy, why it has failed to restrain China’s ambitions, and what the implications of this are looking ahead.

In the face of a perceived challenge from China, the United States uses a mixture of carrots and sticks—including trade, diplomacy, and military power—to retain its overall primacy in the Asia-Pacific region. The U.S. doctrine and grand strategy to attain this objective is spelt out in the Obama Doctrine from 2011, which calls for the deployment of 60 percent of its naval forces by 2020 to the region as part of its pivoting or rebalancing of its global forces. In fact, additional troops and naval assets have been deployed in the Asia-Pacific region already since Hillary Clinton’s speech at the ASEAN Regional Forum, held in Hanoi in July 2010. Furthermore, via the recently concluded Trans Pacific Partnership Agreement last year, the U.S. expects to improve its access to the market in the region; albeit the fate of the TPP now hangs in the balance if the U.S. Senate fails to ratify it before President Obama leaves office in 2017. Despite denials to the contrary by various policymakers, every step that the U.S. has undertaken bears the marks of a deliberate policy to contain China’s rise. Nowhere is this more evident than in the South China Sea. In response to China’s assertive actions, Washington has bolstered its patrols under its Freedom of Navigation (FON) program, designed to “demonstrate water space and the air above it is international,” in the words of Admiral Harry Harris, head of the U.S. Navy’s Pacific Command. It has also sought to strengthen the military capabilities of its alliances in the region (notably with the Philippines) as well as lifted sanctions against Vietnam. Additionally, it has deepened and widened the number of joint naval exercises in the South China Sea, holding joint combat exercises in April with the Philippines. Moreover, the U.S. has succeeded in persuading Japan, Australia, and India to play a more active role in the South China Sea.

While the U.S remains a strong power in the region, its military policy in the South China Sea has not dented China’s adventurism. Strikingly, China seems relatively unperturbed by the new military exercises that the U.S has conducted with the Philippines in its “backyard.” Although China has warned outside parties (read Japan and Australia) from joining the U.S.-sponsored military exercises, the latters’ increased defense engagement in Southeast Asia has not changed China’s strategic calculus. What is more, U.S. policy has in fact served to fan Chinese nationalism, which the state has exploited to legitimize, for example, its land
reclamation activities in the South China Sea. This then begs the question why exactly U.S. policy to restrain China in the South China Sea has failed?

First, China knows that the U.S. policy in the South China Sea is in fact only a “side-show,” or another form of strategic posturing. America’s indecisiveness in hotspots like Ukraine, Syria, Iran, and North Korea, for example, has emboldened China’s resolve in the South China Sea. Beijing understands that Washington needs China to balance U.S. larger global interests rather than being bogged down with the problem of regional security in distant lands or seas. The U.S. needs China to help out with more pressing global issues such as mitigating climate change and ameliorating and mitigating the proliferation of nuclear weapons—notably Iran and North Korea.

Second, U.S. policy suffers from a lack of consistency, coherence, and firmness which China has cleverly exploited to its advantage. Several incidents in the South China Sea have shown the limits of its willingness to stand up to China. A notable example was the Scarborough Shoal incident in April 2012 in which the Philippines conceded a tense tenweek-long standoff with Chinese vessels over the contested reef. Hardliners in Manila to this day continue to blame U.S indecisiveness as the major cause of China’s bold decision to
occupy the Scarborough Shoal.

Third, the U.S. policy of supporting personalities, as in the Middle East, exhibits further weaknesses. U.S support for Philippine President Benigno Aquino, for instance, will put Washington in a quandary when his term ends following general elections to be held next month. Although the U.S. has successfully re-negotiated a new defense pact (the Extended Defence Cooperation Agreement) signed in 2014 concerning accessibility to five military bases in the Philippines, given the fluidity of its domestic politics nothing is guaranteed after Aquino leaves office. A new president may be friendlier towards China such as its former president, Gloria Macapagal Arroyo.

The fourth “limitation” with the U.S. policy in the South China Sea is its controversial Freedom of Navigation program that looks more like a cover for power projection. The deployment of a naval armada in March 2016 (involving the aircraft carrier John Stennis, two cruisers, and two destroyers) is a manifestation of power projection as it is muscle flexing. While claiming it as part of normal patrolling duties, sending a Naval Strike Group was probably intended to “monitor” China’s anti-ship cruise missiles on Woody Island—one of China’s main military outposts in the South China Sea—and which cannot be justified as a FON program.

Fifth, the U.S. views China’s maritime claims in the South China Sea (including what it sees its unrecognized claims over historic waters, claims to territorial seas that exceed twelve nautical miles, unauthorized claims to archipelagic sea lanes, and restrictions to navigation and overflights) as excessive and inconsistent with UNCLOS stipulations. But while upholding the primacy of international law to resolve disputes, the U.S. in fact lacks moral and legal authority for it has itself not ratified UNCLOS; it only signed the 1994 Agreement. Additionally, while the U.S. has complained about China’s policy of requiring prior notification and permission for its military activities in the South China Sea as unlawful, state practice in this matter remains haphazard. Singling out China is indeed cherry picking since 27 countries have enacted national laws or made reservations (when they ratified or signed UNCLOS) denying the right of foreign countries from conducting military activities in their Exclusive Economic Zone (EEZ). China expects the U.S to respect its national law on this matter. All in all, the above factors serve to “weaken” the efficacy of any U.S. effort to constrain China’s actions in the South China Sea. What then are the implications of this for the South China Sea and Sino-American relations?

A strong China will not give up its claimed territories in the South China Sea under any circumstances. Therefore, China is likely to continue to deploy more forces and assets in the South China Sea in the future at the same time as strengthening its diplomatic and economic (including trade) relations with its neighbors. But while seeking to build better neighborly relations, China considers South China Sea an integral part of its mainland territory and is ultimately prepared to challenge any weaker aggressor (specifically Vietnam and the Philippines) with its limited offensive capability including its brown water Navy. On the contrary, this does not mean that it will directly confront U.S. military power in the South China Sea. Indeed, many in China believe while it has geography on its side, the timing is not right in a situation where the balance of forces vis-à-vis the U.S. is not yet in its favor.
Notwithstanding, the way forward is for both powers not let the conflict in the South China Sea become the stumbling block in their bilateral relations whereby U.S.-China cooperation is critical for the global future. China must continue to reassure Washington its policies in the South China Sea will not undermine the flow of international trade through the area and be willing to play by the accepted rules under international law—which means not jeopardizing the freedom of navigation of all stakeholders. As a superpower, the U.S. must reciprocate by not be seen to be unduly pushing its military weight in the South China
Sea in a provocative manner under the pretext of its FON program.

Beyond Sino-American relations, there is a need to deescalate tensions between China and the claimant states. Moves are now afoot both at the official level through ASEAN as well as track two initiatives. For example, with assistance from Singapore and the Office of the Geneva-based Centre for Humanitarian Dialogue, a group comprising experts (including naval officers) from the claimant states (including China) have so far held four meetings with a fifth meeting scheduled in the Philippines with the stated objective of preventing misunderstanding or incidents from erupting into military conflicts. Furthermore, other bottom-up initiatives such as the proposed establishment of a Regional Naval Forum for the Spratly Islands, aimed at promoting crisis management and confidence building among naval commanders, have gained some traction at the official level. It can only be hoped that such cooperation at the operational level will receive committed endorsement from the respective political leaderships, especially China which is the most powerful claimant in the South China Sea disputes.