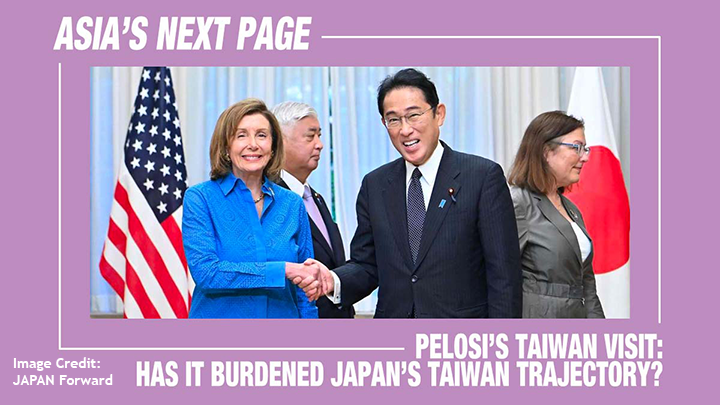 Of late, Japan has been expediting the process of breaking its strategic silence on the contentious Taiwan Strait. Taiwan’s status, as China repeatedly remarks, is a “red line” that cannot be crossed, because China regards it as its core sovereign interest and an “inalienable” part of its territory.

Hence, over the years, Japan has been cautious in its approach, although Japan-Taiwan relations made a significant headway during Shinzo Abe’s tenure, who famously pointed out that an “emergency” for Taiwan was one for Japan and the Japan-US alliance, too.

But post China’s growing assertiveness in the South and East China Seas and its increased air intrusions into the Taiwanese air defense identification zone in 2021, Japan stepped up its rhetoric. A significant move was the inclusion of the Taiwan issue in the April 2021 joint statement between then Japanese Prime Minister Yoshihide Suga and US President Joe Biden.

Japan’s defense white paper in July 2021 in another landmark step accorded Taiwan separate focus and highlighted the Strait’s “sense of crisis.” The concern for Taiwan was only strengthened in 2022: Japan’s foreign policy annual report, the Diplomatic Bluebook, and its latest defense white paper both have strengthened this trend to “pay close attention” to the situation around the Taiwan Strait.

The grounds for such change were best encapsulated in September 2021 by Fumio Kishida, when he was still a contender for the prime minister’s position. In an interview with the Wall Street Journal he said: “The front line of the clash between authoritarianism and democracy is Asia, and particularly Taiwan.”

The Pelosi Trip and its Fallout

Nonetheless, it is being contended that the US Speaker Nancy Pelosi’s recent Taiwan visit has embarrassed the US Asian allies, who are now worried over the larger and long-term consequences of China’s fury. Washington’s lack of a committed response on the trip, including Biden’s earlier comment hinting tacit disapproval, lends credence to this theory.

In contrast to Japan, the South Korean President Yoon Suk-yeol managed to escape China’s direct fury by avoiding meeting Pelosi. Undoubtedly, Japan and South Korea were unwittingly caught in the line of fire because of the much-discussed but unlisted Taiwan stopover.

The trip has certainly aggravated the US-China and Japan-China ties, which were already at a low point. But is it reasonable to surmise that the visit has also presented Beijing a compelling scenario to execute its unification plans and attempt a takeover of the surrounding East and South China Sea region?

Has Pelosi’s super-controversial stopover complicated Japan’s trajectory? What are the immediate and long-term implications for Japan’s Taiwan stance?

Negotiating the Aftermath: A Japanese Perspective

Japan has not directly commented on Pelosi’s trip to Taiwan, which was strongly condemned by Beijing as a breach of Washington’s commitment to its China policy, including Cross-Straits stability.

Chief Cabinet Secretary Hirokazu Matsuno said that the Japanese government was “not in a position to comment,” but expressed concern over China’s military drills post the visit.

Notwithstanding this lack of an official comment, Prime Minister Kishida’s meeting with Pelosi and his criticism of China’s military maneuvers, largely owing to ballistic missiles landing within Japanese territory just prior to Pelosi landing in Japan, were criticized as “collusion” with Taiwan secessionists by China.

In some global strategic circles, however, the Kishida-Pelosi meeting and Japan’s official silence were interpreted as polite deference to Japan’s only treaty ally while accommodating a hostile neighbor who is an important economic partner.

Another reason for the face-to-face meeting is the strengthening Japanese resolve to protect its interests (e.g., ramifications on sea trade and on its nearby territory) in the event of a Taiwan contingency. Besides, several Japanese leaders have already voiced the need for supporting Taiwan’s defense in such a scenario. Japan, in solidarity with the US, is thus signaling a unified deterrence to Chinese intimidation tactics.

Japan’s 2022 defense white paper has already highlighted China’s attempts at changing the status quo. The reports of an impending breakdown of the status quo were intensified after the latest drills that again witnessed Chinese military crossing the Taiwan Strait median line – an unofficial border that China asserts “does not exist.”

In the event of a partial or full blockade of this region or even if the military exercises become the new normal, the East Asian, in turn global, supply chains will be severely hit.

The Japanese strategy vis-à-vis Pelosi’s visit has aligned with the US, namely maintaining studied silence over the importance of the trip while decrying China’s disproportionately belligerent reaction.

But in the wake of the five missiles fired into Japan’s exclusive economic zone (EEZ) for the first time – against which Japan has lodged a diplomatic protest – and further incursions into the Senkaku Islands, the hardening of Japan’s stance is expected.

China’s actions against Japan are not only an attempt to strengthen Beijing’s long-held opposition to what it calls “self-declared” Japanese EEZ, but also a signal to deter Japan from pursuing the free and open Indo-Pacific goals. Japan’s growing global profile and its vocal regional outreach, particularly post Ukraine, have been a constant source of Chinese ire, for fear of Beijing being replaced as a regional hegemon.

Thus, in a vindictive display of righteous self-justification against Pelosi, China has expedited a new maritime normal where increased military drills or incursions and remarking territorial borders – beyond outright rejection (e.g., Taiwan Strait median line and Japan’s EEZ) and nebulous interpretation of international law restricting freedom of navigation and oversight – could be the order of the day.

Over the last decade, recognition has been building within Tokyo over the interlinked nature of security between the Taiwan Strait and Japan. Tokyo views the People’s Liberation Army (PLA)’s adventure in Taiwan as a warning over PLA capabilities and what China could do to the self-governed island and elsewhere.

Japan worries that one of the PLA’s targets could be Yonaguni in Okinawa – a strategically important island that hosts key bases for the Japanese Self-Defense Force and around 50,000 American troops. The recently launched missile that landed just 80 km away is a clear presentiment of the risks for Japan of being dragged into a future conflict if it were to cooperate with the US to stop China’s reunification plans with Taiwan.

As a counter-offensive strategy, two days after Pelosi visited Taiwan, the US and Japanese F-15 fighter jets conducted joint military exercises in Okinawa. Notably, the aftermath of Pelosi’s visit has coincided with Kishida’s cabinet reshuffle, which though scheduled for September was brought forward post polls highlighting the Kishida government’s drastic fall in ratings.

The changes became imperative after the ruling Liberal Democratic Party (LDP) won the Upper House elections by a landslide, but was mired in controversy due to links by some top leaders to the conservative Unification Church. However, Kishida has stressed continuation of his momentum in foreign policy and security issues by retaining his foreign minister and inducting an experienced hand as defense minister.

No doubt, the ongoing debate within Japan over augmenting its defense spending and capabilities will intensify as the PLA’s latest antics have created an even greater impetus for Japan to focus on military expansion and security planning. Steps are already underway to make this possible.

The defense ministry’s record budget proposal worth $41 billion USD aims to focus on building up Japan’s capabilities for attacking an enemy from outside the firing range – such as with drone systems. Japan needs to also consider introducing new rules that would allow for more preemptive military action if the country felt at risk.

Kishida has vowed to implement constitutional reforms that will transform the pacifist country’s outlook. The decisive election victory will further LDP’s security aims. Importantly, Kishida’s moderate image, in contrast to Abe’s conservative one, allows the public better leeway in not construing the revisions as part of a conservative agenda. The Japanese domestic support for Taiwan is at an all-time high, with more than 90 percent in favor of Japan preparing against a possible Chinese military offensive against Taiwan. Thus, this could be LDP’s golden period for instituting changes vis-à-vis Taiwan, too, when the national defense strategy (last updated in 2013) is revised later in 2022.

However, the government will need to take into account that the public support for Taiwan excludes direct military engagement. At the same time, Chinese tactics toward Japan post Pelosi’s visit will surely sway public opinion toward strengthening Japanese actions for fear of being caught in the regional conflict.

If the PLA decides to carry out an amphibious invasion from both sides of Taiwan, Japan’s Southwest Islands will be involved. Yonaguni Island in particular now needs to plan for increasing its defense forces, evacuations, and protection of civilians, as well the potential for a large influx of fleeing Taiwanese.

Further, as the Taiwan Strait has long been identified by the PLA as a “choke point” for Japan’s maritime trade (from energy to semiconductors), Tokyo must prepare to overcome limitations such as a potential maritime blockade.

Accelerating and developing schemes like the Japan-India-Australia Supply Chain Resilience Initiative (SCRI) with Taiwan could help ensure minimal impact on trade while not undermining Japan’s capacity for aiding Taiwan.

Similarly, greater coordination with the US is essential during the transition period. Diplomacy is gearing away from strategic ambiguity, even as clear-cut policy decisions such as diplomatic ties with Taiwan, will be still out of reach in the near future.

The two allies must avoid inefficient decision making, policy flip-flops, and escalated official responses so as to avoid giving China any pretext for inducing war. Simultaneously, they must generate an effective global solidarity strategy to ensure Taiwan’s long-term democratic future.

This article is part of the [Asia’s Next Page] series on JAPAN Forward. Find other articles in the series by Dr. Jagannath Panda, here.