National Congress of the Communist Party 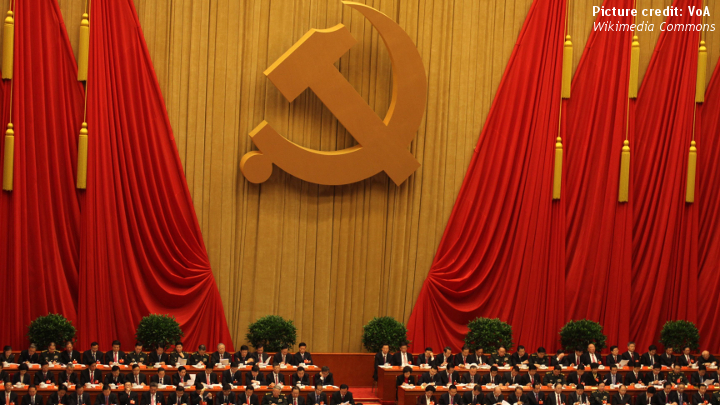 The event lasts roughly 7 days and is widely covered by international media due the change of state leadership and policy. This event is not to be confused with the National People’s Congress (NPC), which is an annual legislative congress.

This year, 5 of the 7 current PBSC members should retire. Only Xi Jinping and Li Keqiang are eligible for a second mandate. Furthermore, this means that 11 of the 25 members of the Politburo will remain.[2]

Hence, following the convention of age restrictions, there is a number of major leadership seats at the national and provincial levels that will become vacant.

However, there are speculations that President Xi Jinping may bend the age convention in order to retain powerful allies such as Wang Qishan currently the Secretary of the Central Commission for Discipline Inspection and who turned 69 last July.[3]

Elective Process of the Core Bodies of the CPC

The CPC National Congress is of high importance since it helps determine the successive leader of the PRC.

The election process follows a specific process among communist regimes which is as follow:

There are some questions of whether the age limit will be raised since the average age of delegates currently is 51.8.[5]

The 19th NCCPC will involve 2,287 elected party delegates, many of whom are state leaders, top executives and military generals. Originally, the 19th NCCPC was supposed to see 2,300 representatives but 13 delegates from Chongqing were removed from the Party and the CPC Congress due to corruption charges. Nevertheless, this is 17 more delegates than during the 18th National Congress in 2012, which had 2,270. State media announced that 2,287 delegates have been elected for the upcoming Congress.

The delegates are to be elected by 40 electoral units all over the country.[6] There are 7 types of units:

The number of delegates per province/autonomous region are established by the number of the CPC members in those units.

Under customary rule, the members of the Politburo Standing Committee (PBSC) are delegates to the 19th CPC Congress. The PBSC’s members represent the following provincial units: Xi Jinping is the delegate from Guizhou, Li Keqiang from Guangxi, Zhang Dejiang from Inner Mongolia, Yu Zhengsheng from Xinjiang, Liu Yunshan represents Yunnan, Wang Qishan is the Delegate from Hunan, and Zhang Gaoli from Shaanxi.[8]

Under the supervision of the central authority, the number of delegates is decided upon the proportionality the Party members in the of each province, autonomous region and municipality.[10] This year, the provincial units who have sent the greatest number of delegates are Sichuan, Shandong, Shanghai, and Guangdong who have each sent more than 70 delegates.

The Central Committee of the Communist Party of China state in their guidelines that the number of candidates for the 19th CPC Congress should exceed, by 15%, the total number of delegate positions available.[11]

In order to become a candidate, loyalty to the party and a criminal record free of corruption charges are key factors. This has led to a stricter screening of potential candidates based on their commitment to the CPC and  Xi’s anti-corruption scheme.

There are 5-steps to become a delegate at the NCCPC:

Out of the 1,576 Party representatives from provinces, municipalities and regions, 229 are from ethnic groups.[13] The proportion of the ethnic minority groups are estimated to be roughly 14% of the delegates within the provincial units. Tibet has about 66% of its delegates from an ethnic minority group, among which the Tibetan ethnic group account for about 69% of the delegates in the Tibetan unit.

In the case of Xinjiang, the Uighur ethnic minority represents approximately 21% of the delegates from their unit. Aggregately, ethnic minorities account for 11.5%[14] or 261 individuals of the total delegates elected to attend the 19th CPC Congress.

The number of female representatives at the NCCPC has increased over time. Their participation grew from 382 female delegates in 2002 (15th NCCPC) to 521 participants in 2012 (18th NCCPC).[15] This year, there are 448 women among the 1,576 Party representatives that have been chosen from provinces, municipalities and regions.

The gender balance within the ethnic minority delegates from the provincial and autonomous region units is more evenly balanced  than other delegate groups with 54% men and 46% women. Taking all units into account, there are 550 women among which 113 are from ethnic minorities.

This year, the second-biggest unit to provide delegates is the PLA with 253 delegates. On September 9, 2017, the PLA declared that they were to elect 253 delegates for the 19th CPC Congress. Whilst, for the 18th CPC Congress in 2012, the PLA sent 300 representatives. The delegation includes 3 ethnic Tibetans, while during the last Party Congress there was only one. Furthermore, it is estimated that 90% of the delegates for the PLA will be the first-time attendees, for whom their ascension is linked to President Xi’s rise.

The 18th CPC Congress was key in introducing Xi Jinping as the new leader of the party and the PRC. This was marked by the downfall of Bo Xilai from the Chongqing province, who was perceived as a solid rival to Xi Jinping for the seat of the CPC’s leadership.

This Congress also saw the addition of Hu Jintao’s political philosophy within the Party Constitution under the name of Scientific Outlook on Development. In addition, the idea of “Socialism with Chinese Characteristic” and “construction of ecological civilization” were also incorporated with the Party Constitution.

[4]“Xi Jinping’s political thought will be added to Chinese Communist Party Constitution, but will his name be next to it?” South China Morning Post, last modified October 6, 2017, http://www.scmp.com/news/china/policies-politics/article/2111746/xi-jinpings-political-thought-will-be-added-chinas.

Data for diagrams is from: