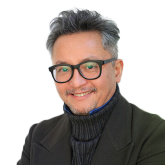 Dr. SangWoo Kim was born in SaChun City in Gyungsangnamdo Province on 14 October 1954. He has spent three years in the US in the sixties while his father was military attaché for the Korean Embassy in Washington DC.

He did his BA in Politics and Diplomacy at Kyunghee University in Seoul, and an MPhil from University of Cambridge in International Relations followed by a PhD in History.

Dr. Kim started his political career in 1992 advising the late President Kim DaeJung. He continued to assist him in various positions for 10 years. In 1993, he was Special Assistant and Research Fellow at the Kim Dae Jung Peace Foundation, Secretary General for the Forum of Democratic Leaders in the Asia-Pacific, a Member of Parliament and Advisor to the Leader of The People’s Congress for New Politics Party and the Millennium Democrat Party. During the Kim DaeJung Government he was Ambassador for International Security Affairs at the Ministry of Foreign Affairs and Trade, as well as Special Advisor to the Director of the National Intelligence Agency (2000-2002). In the 2002 Presidential Election, he was the Spokesman for the Presidential candidate for the Millennium Democrat party Noh Moo Hyun. In 2005, he was appointed Secretary General of the Korean Olympic Committee for 4 years. He has also lectured for 4 years at the College of International Studies, Kyunghee University in Inter-Korean Relations and East Asian Relations.

He is currently Advisor to CJ Group(a family company of Samsung), and Vice president for the Korean Ice Hockey Association.