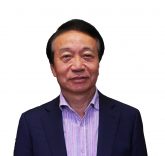 Dr. Yong-Sup HAN is a Visiting Fellow at ISDP’s Stockholm Korea Center. He is a Professor Emeritus of Korea National Defense University in the Republic of Korea and a member of APLN (Asia-Pacific Leadership Network for Nuclear Non-proliferation and Disarmament. He launched the Korea Nuclear Policy Society and served as its first President (2012-15). Moreover, he has been Vice President of KNDU (2010-12), and President of Korea Peace Research Association (2007-10), and also directed the Research Institute for National Security Affairs of Korea National Defense University (2005-08).

Throughout his academic career, his main interest in teaching and developing policy proposals to the government lie in defense policymaking, arms control, alliance management, non-proliferation and North Korea’s denuclearization, and East Asian security issues. He had been a visiting scholar at Portland State University, Oregon of the United States, and a visiting professor of Fudan University in Shanghai of China. Additionally, he has experience from being a visiting professor at the China Foreign Affairs University and a visiting fellow at the U.S. RAND Corporation. Before joining the faculty of Korea National Defense University, he had been a special assistant to the Korean Minister of National Defense, participating in the inter-Korean denuclearization negotiations while doing policy recommendations to the Korean government on policies of arms control and denuclearization and the Korea-US alliance.

He has got a BA and MA from the political science department of Seoul National University from 1978 and 1982. And he has got Masters in Public Policy at Kennedy School of Govern-ment, Harvard University (1987) and Ph. D. of Security Policy of RAND Graduate School of RAND Corporation of the United States (1991).

His English publications include Peace and Arms Control on the Korean Peninsula (Kyungnam University Press, 2005), Sunshine in Korea co-authored with Norman Levin (RAND, 2002), Nuclear Disarmament, and Non-proliferation in Northeast Asia (UNIDIR, 1995). Designing and Evaluating Conventional Arms Control Measures on the Korean Peninsula (1991). His recent Korean book is “The Fate of Nuclear Weapons in North Korea (2018).”