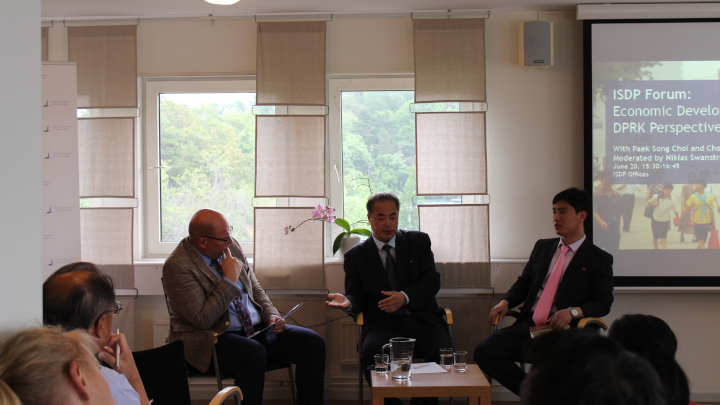 On June 20, ISDP held a public forum on economic development on the Korean Peninsula with our visiting fellows from North Korea, Paek Song Chol and Choe Hyon Do from the Korea-Europe Association, North Korea. The forum was moderated by Niklas Swanström, Executive Director of ISDP.

In their presentation, Mr. Paek and Mr. Choe discussed how North Korea was moving away from nuclear development toward an economic line of development. In order to implement change needed in light industry and agriculture in the country, the major issue faced by North Korea is that of electricity shortage. Ar present, the researchers said, several already existing hydroelectric dams are undergoing development, and several new ones are being constructed. Furthermore, Mr. Paek and Mr. Choe focused on the perceived need for a ‘juche’-oriented steel production and the development of Special Economic Zones.

The presentation was followed by a Q&A which touched upon issues like droughts in North Korea, sanctions, as well as official data on economic growth in the country.

Watch the video from the event here.