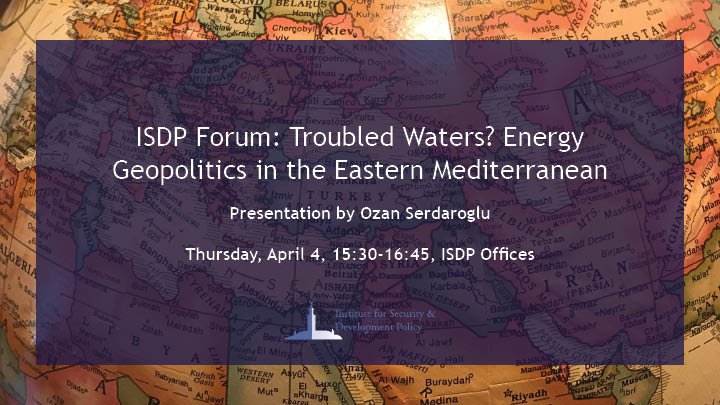 Lying on the crossroads between Europe, Africa and Asia, the Eastern Mediterranean region has traditionally been a zone of conflicts, rivalries and strategic alliances. During the last decade, the region has become further stirred following the discovery of 2100 billion cubic meters of natural gas reserves. Coinciding with the “Arab Spring”, the Cypriot economic crisis and a decline in Turkey-Israel relations, the beginning of a new regional energy game has altered the existing geopolitical order within just a few years.

The need to exploit and commercialize these reserves have united Cyprus, Greece and Israel in an “energy triangle” where they jointly work on projects to safeguard the production and supply chain of the natural gas. The trio is also engaged in an improved dialogue with Egypt and aspires to greater regional energy cooperation with more countries – except for Turkey. For its part, Turkey does not want to remain side-lined and manifests its will by pursuing its own energy projects, occasionally engaging in deterrence, but at times also dialogue.

This rapid transformation of intra-regional relations requires an up-to-date analytical approach to the Eastern Mediterranean. In this ISDP Forum, Dr. Ozan Serdaroglu, Associated Fellow at ISDP, will address this need by focusing on the new geopolitical dynamics introduced by the natural gas discoveries and driven by the energy triangle.